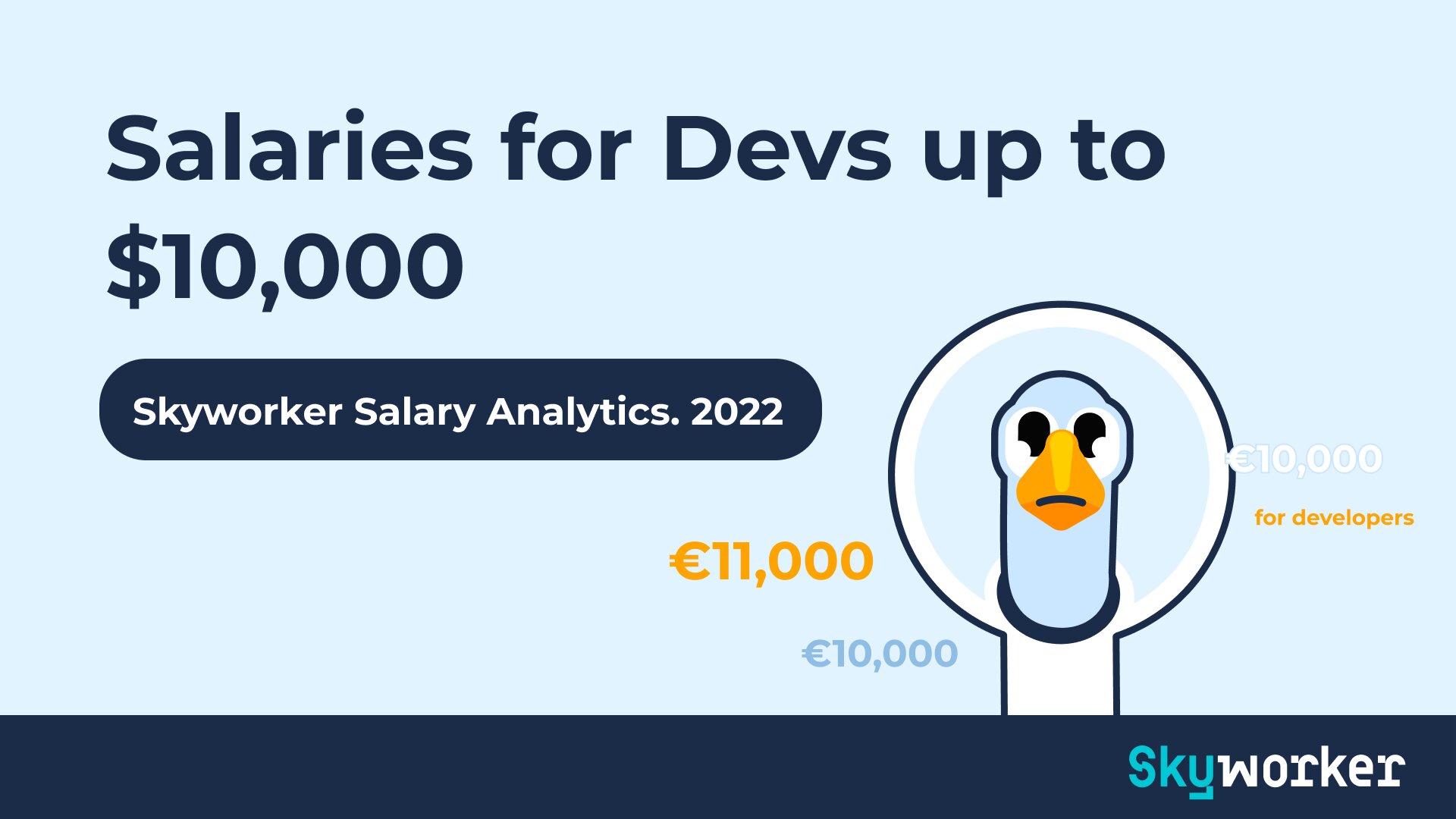 The real Salaries Developers from Poland and Ukraine can get are much higher than the local analytics shows. While local job platforms say that the Median Salary Range for Senior Devs is $4,500 - $5,000 based on job offers from local companies, the real Median developers have on the table from companies all over the world is much higher. Moreover, the Higest Salaries reach up to $10,000. Turn on some heavy metal and watch the real market data based on job offers from 44 countries for 30,000+ Developers on Skyworker* ;)

*Skyworker is like Tinder for tech jobs. Developers swipe on jobs from all over the world here.

International companies have started the fierce competition for Central European Developers during last years. One of the benefits these companies offer on Skyworker is the “Above the market compensation rates”. The following popular benefits are: Annual Bonuses, Stock Options, Sign-in Bonus and so on. So let’s widen the borders and see the real Salaries are offered for Developers from Poland and Ukraine.

We gathered the data about Maximum and Median Salaries offered on Skyworker. The data is divided by Specialty, Seniority Level and the employment type (B2B VS Employment Contract). The Salaries below are presented in Brutto.

This article shows the data about 15 tech specialties:

We didn’t include the Full-Stack variations here. If you are a Developer of any Specialty, see your personal Salary Stats on Skyworker. The app shows you:

The Analytics in this article is based on 3000+ job offers for Polish and Ukrainians Developers from 44 countries. The TOP 5 countries are: Poland, USA, United Kingdom, Germany, Netherlands, Ukraine, Canada.

The majority of jobs have the remote work type. Companies which have already switched to the “worldwide full-remote” strategy are leading the competition.

Let’s start the story from the most popular Specialty.

Spoiler! Even Junior C++ job offers didn’t reach the $6,000 as a Max Salary offer on a B2B terms, but the Junior Frontend did. Congratulations to those who have a clue about the React Framework ;) Meanwhile, the Median Salary Ranges in Frontend Specialty find itself in the middle of all others. A bit more than Cross-Platfrom, a bit less than Scala, but decent enough.

The Max Salary on B2B terms for Senior Frontend is among the highest on Skyworker - $10,000

Just look at that Median Salary Range for Senior Python. These Developers are the fourth biggest WANTED! group on Skyworker and the Median reflects it. Once again, $10,000 Max as the highest Salary on B2B terms.

The job offers for C#/.NET Developers have one of the smallest difference in Salaries between B2B VS Employment Contracts - $500-$1,000 tops. The Median Salaries for the Junior, Middle and Senior Level are quite average in comparison to other Specialties.

PHP Devs can count on one of the highest Salary Rates now. Not only the Max Salary for Senior Devs is $10,000, but the Junior Role reached the mark of $6,500! No Junior Role can compete with PHP regarding the Salaries on Skyworker.

The huge gap between the B2B and Employment is here for C++ Developers. This difference impacts the Median figures big time and makes them look average. On the other hand, the Max numbers seem much more promising.

Greetings to the Full-stack JS Devs ;-) Your Max and Median Salaries can stand the competition with most of other tech specialties. Moreover, the Median for Senior Node.js Devs is one of the Highest on Skyworker as well.

Such a rare and wanted kind - Go Devs. Not only the offers for Senior Roles went through the ceiling here, but the Junior ones keep up very well.

One of the highest Max Salaries and the Highest Median for Middle-Senior Devs now is offered for Scala Specialty. $6500-7000 for Middle and $8000-8500 for Senior Devs as a Median Range kicks the other specialties asses.

The gap between B2B and Employment for Junior and Middle Ruby Roles here is enormous - $2500. As well as for C++ Devs, this difference influences the Median and makes it average in comparison to other specialties.

All Mobile Specialties go toe-to-toe in the Salary Competition. Senior iOS can count on the $7,500 as a Max Salary even with the Employment Contract. In the meantime, the Median Salary Range for Senior iOS Devs lags behind in comparison to Android this time - the difference is $500.

While the Median Salary Ranges for Junior and Middle Android Devs are equal to the iOS Devs, the Max Salaries for Middle Level are lower by $1,000-$2,000.

The absolut heavy-weight champion in a Max Salaries in Mobile Category - Cross-Platform Development. The Senior Flutter and React-Native Developers on Skyworker are being offered $10,000 as a Max Salary. Meanwhile, the Median Salary for Junior Cross-platform is lower by $1,000 than other Mobile Specialties.

Salaries for QA are lower than for Developers, nothing mindblowing in that. But the fact that Junior AQA and Junior Manual QA have equal Ranges is a bit surprising. Nevertheless, the Middle AQA Roles jump much higher than Middle Manual QA in both Max and the Median Salaries.

Manual QA - the second biggest group of candidates on Skyworker. Their Median Salary Range for Seniors almost reaches the Median for AQA, but all other levels are offered much less.

There are no borders in the tech field already and the tech world doesn’t end up in the country you are located in. The wider you look, the more you can get: more challenges, more experience, more money. This is the philosophy of Skyworkers - the people Skyworker app was built for.

Each (Developer) Skyworker can see their personal Max and Median Salary in our app anytime. Just log in and check the real-time personal data.

Swipe on jobs and have the best one